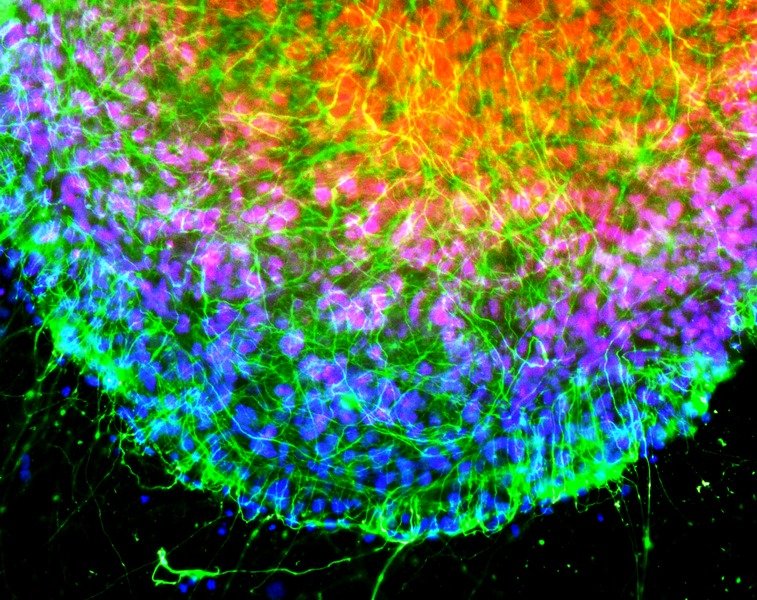 First described in 2015, expansion microscopy is an imaging technique that improves on the resolution of conventional light microscopy by physically expanding the sample. This gives this technique several advantages over super-resolution microscopy, most notably the ability to use standard microscopes and common fluorophores. Expansion microscopy is growing rapidly, especially among the neuroscience community, where it is used for synaptic imaging, mapping neural circuits, and studying neurological disease.

What Is Expansion Microscopy?

The resolution limit of conventional light microscopy is approximately 200 nm, due mainly to the fact that light is diffracted as it passes through the microscope’s glass objective. To break through this so-called diffraction barrier, various super-resolution microscopy techniques have been developed to reduce the resolution limit by around 10-fold. However, these require specialized microscopy instrumentation and, in many cases, photoswitchable fluorophores, which limit their utility. Rather than employing an optical process to enhance resolution, expansion microscopy uses a swellable polymer to physically expand the specimen. With this technique, researchers have been able to achieve resolutions of approximately 25 nm with no need for dedicated equipment or reagents.

Expansion microscopy relies on the use of polyelectrolyte gels – polymers bearing multiple ionizable groups that can hold a large amount of water without dissolving. When these are infused into biological samples for subsequent dialysis in water, the polymer network expands, increasing the size of the specimen.

Two main workflows have been developed for this microscopy technique. Pre-expansion labeling involves fixing the sample before adding fluorophore-labeled antibodies along with anchors to covalently link endogenous proteins to the gel. Next, the specimen is incubated in a monomer solution of the polyelectrolyte and the gel is allowed to form. Finally, the specimen is softened by homogenization, which may be either enzymatic or mechanical, and immersed in water for the gel to expand. The sample can then be imaged using a standard fluorescence microscope.

Post-expansion labeling follows a similar method, but staining is performed after the sample has been expanded. Deciding which approach to use largely boils down to the cellular location of the target of interest. However, it is important to note that post-expansion labeling may increase the likelihood of detecting scarce targets compared to pre-expansion labeling, since the latter effectively reduces the fluorophore concentration to lower the signal intensity. With post-expansion labeling, researchers can boost the signal by incorporating methods such as the hybridization chain reaction, signal amplification by exchange reaction (SABER), or iterative antibody binding into staining protocols.

How Has Expansion Microscopy Evolved?

A major advantage of expansion microscopy is that it allows nanoscale imaging using a standard fluorescence microscope. It can also be performed with conventional fluorophores, allowing researchers to select from a vast range of off-the-shelf labeled antibody reagents. In addition, this microscopy technique can establish a larger body of data when used in conjunction with super-resolution microscopy, as these two processes are orthogonal.  Lastly, expansion microscopy is highly accessible, with a relatively straightforward protocol.

While expansion microscopy lends itself to almost any field of research requiring cells or tissues to be imaged, this technique has seen greatest uptake within the neuroscience community. Neurons are notoriously difficult to image due to the extremely fine nature of their protrusions, which often preclude the use of conventional light microscopy for characterizing vital signaling compartments.

During its inception, expansion microscopy was used for synapse imaging in murine brain tissues. Naturally, the success of this research led to its rapid exploitation for similar studies in model systems including Drosophila, C. elegans, and zebrafish. Other key applications of this  microscopy technique include its use for neuron tracing and large-volume imaging, which enables imaging of synaptic architectures in tissues such as the mouse brain by rendering the sample transparent, and for studying neurological disorders such as Parkinson’s disease, schizophrenia, and amyotrophic lateral sclerosis.

Regardless of your research’s objective, FluoroFinder is here to help! Use our Antibody Search to find antibodies for your targets of interest, and turn to our Spectra Viewer to quickly compare over 1,000 fluorophores from all suppliers in one intuitive platform. If you’re performing multiplexed imaging, use our Panel Builder to view fluorophores and antibodies from over 60 suppliers in the context of your instruments and configurations

Sign-up for our eNewsletter to receive updates about microscopy and other fluorescence techniques.