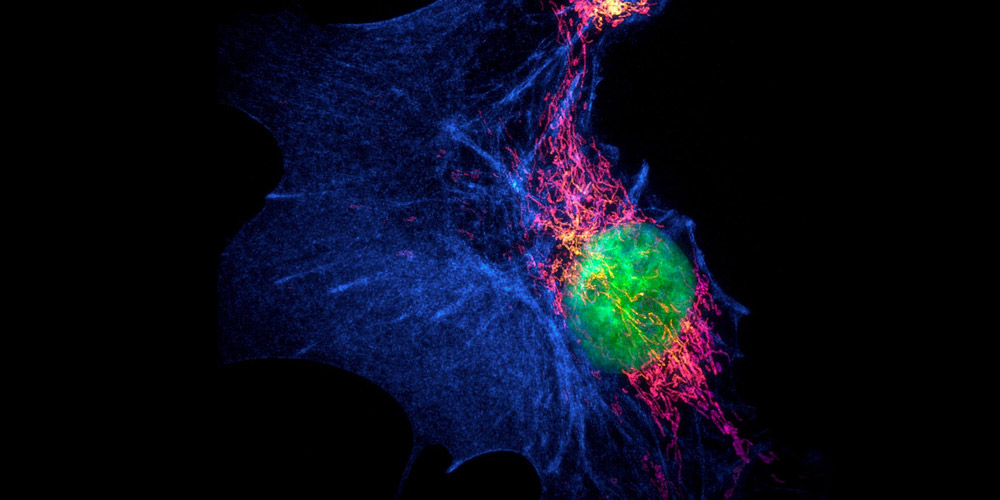 Breaking through the diffraction barrier for deeper biological insights

Super-resolution microscopy (SRM) improves conventional fluorescence microscopy by achieving higher resolution. It enables fine mapping of structures such as microtubule protofilaments, subcellular organelles, or synaptic vesicles that cannot be clearly visualized using established methods, and provides deeper insights into cellular physiology under conditions of both health and disease. Multiple techniques fall under the SRM umbrella, most of which depend on the use of photoswitchable fluorophores. Here, we provide a brief overview of SRM and highlight the importance of choosing the right fluorophores to maximize the benefits it has to offer.

What is super-resolution microscopy?

Conventional fluorescence microscopy has a resolution limit of approximately 200 nm. This is largely dictated by the diffraction of light as it passes through the microscope’s glass objective and encounters the sample material. Diffraction causes each fluorophore to be interpreted by the microscope as a blur, with the size of the blur being referred to as the point spread function (PSF). Where the structure of interest is smaller than the PSF, or where two or more fluorophores fall within its boundaries, the microscope struggles to resolve the target of interest. The resolution limit of super-resolution microscopy is around 20 times greater than that of conventional fluorescence microscopy. Some SRM techniques can distinguish two fluorophores that are separated by as little as 10 nm. This superior resolution is attained either by reducing the size of the PSF or by sequentially visualizing small numbers of fluorophores to preclude them from existing too closely.

What are the main SRM techniques?

SRM techniques can broadly be classed as those that involve decreasing the size of the PSF and those that are based on sequential localization of individual fluorophores. Reversible Saturable Optical Linear Fluorescence Transitions (RESOLFT), Stimulated Emission Depletion Microscopy (STED), Ground-State Depletion Microscopy (GSD), and Saturated Structured Illumination Microscopy (SSIM) are all centered on the former, and essentially function by restricting the production of any fluorescent signal to a particular region.

With RESOLFT, a donut-shaped beam is typically used to switch off fluorophores at the edge of a defined area, meaning that fluorescence is only detected from those molecules found at the middle of the donut. STED follows a similar approach but instead stimulates the emission of peripheral fluorophores to the point of saturation/deactivation. GSD and SSIM employ many of the same principles as STED. However, both techniques use a single wavelength (rather than two distinct wavelengths) for fluorophore excitation and deactivation.

Photo-Activated Localization Microscopy (PALM) and Stochastic Optical Reconstruction Microscopy (STORM) fall into the second category. During PALM, small numbers of fluorophores are precisely located in a cyclical manner using photoactivatable fluorescent proteins before the images are combined to produce a complete picture. STORM is comparable to PALM but, rather than fluorescent proteins, uses organic dyes that can switch between on and off states. Since it was first developed, STORM has been adapted to yield another technique, direct STORM (dSTORM); this requires only an activator dye rather than both an activator and a reporter as described in the original method and can induce common fluorophores to photoswitch through the use of specialized buffers.

What properties of fluorophores should be considered for SRM?

Because many SRM techniques rely on photoswitchable fluorophores, it is not always possible to perform SRM-based research using the same fluorophore reagents that have been used for other applications. Fluorophore characteristics that must often be considered for SRM include the on-off contrast ratio (the brightness of the fluorophore in its on state divided by its brightness in the off state), the switching cycle capacity (how many times the fluorophore can switch between on and off states before becoming irreversibly photobleached), and the duty cycle (the proportion of time spent in the on state), with other important factors being the photoswitching rate and the number of detected photons per switching event. All of these play important roles in determining the suitability of the fluorophore to accurately detect the target of interest.

Which fluorophores are used for SRM?

Many existing fluorophores have been evaluated for compatibility with SRM and manufacturers frequently share this information on their websites. For example, Thermo Fisher Scientific’s website includes links to publications citing the use of Alexa Fluor® dyes for dSTORM, while Active Motif provides recommended ATTO dyes for STED. Other fluorophores with proven utility for various SRM techniques include Biotium’s CF® and LysoView™ dyes that are complemented by MemBrite® Fix Cell Surface Staining Kits for labeling live cells, and Janelia Fluor® Dyes that benefit from increased brightness compared to dyes that share similar extinction and excitation/emission profiles. A wide range of fluorescent proteins is also employed for SRM including green fluorescent protein (GFP), red fluorescent protein (RFP), and mCherry.

Selecting the right fluorophores for SRM involves thinking a little differently compared to choosing fluorophores for conventional fluorescence microscopy – and it pays to investigate the range of options available during experimental design. Fortunately, we’re here to help! FluoroFinder’s Spectra Viewer lets you quickly compare over 900 fluorophores from all suppliers in one intuitive platform, including many fluorophores proven to work for SRM, while our Panel Builder enables you to optimize your multiplexed experiments with the very latest fluorophore and antibody offerings across >60 suppliers. Use your favorite SRM technique to gain deeper insights into your samples by using our platforms today.