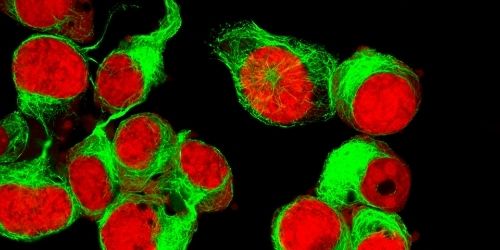 In recent years, technologies for single-cell analysis have evolved rapidly, revealing huge differences between cells once categorized as being the same type. This variability is most apparent within the cells of the immune system, which must undergo multiple dynamic changes throughout their lifetime to protect the body from harm. To interrogate cellular differences, researchers can perform analysis at the DNA, RNA, or protein level, or can combine several datasets via a multiomics approach. Here, we comment on the basis of cellular diversity within the immune system before explaining some key features of popular single-cell analysis techniques. We also highlight the importance of fluorophore selection for single-cell analysis methods designed to measure fluorescent readouts.

Cellular diversity within the immune system

After being produced in the bone marrow, immune cells undergo multiple dynamic changes. These include maturation in primary (e.g., bone marrow and thymus) and secondary (e.g., lymph nodes and spleen) lymphoid organs; differentiation in peripheral tissue; and development into long-lasting memory cells after encountering a potentially harmful agent. Critically, each immune cell follows a distinct trajectory as it contributes to the host’s overall immune response, resulting in cellular populations that comprise numerous cell types/states and functional specializations. Minority cell populations are often of particular interest to immunologists for their role in initiating the host defense response.

Bulk analysis techniques like Western blot or ELISA are designed to measure the average response of a heterogeneous sample, typically using lysates prepared from many thousands of individual cells as the input material. The main drawback of these methods is that rare events are often overlooked, making them unsuitable for characterizing complex immune cell populations. In contrast, single-cell analysis techniques monitor cell-to-cell variability, meaning they can reveal even low-frequency events. For this reason, single-cell analysis holds significant promise to advance researchers’ understanding of various disease states and predict patient responses to available therapies. The application of single-cell analysis technologies continues to grow as methods become more affordable and accessible.

Single-cell analysis can be performed at the DNA, RNA, or protein level. To analyze the DNA of individual cells, an established approach is to perform whole genome amplification (WGA) and next generation sequencing using flow-sorted nuclei. For interrogating cellular transcriptomes, single-cell RNA sequencing (scRNA-seq) is widely used for highlighting differences in gene expression. Techniques for studying protein expression in single cells include microscopy, flow cytometry, and mass cytometry, each of which offers different benefits.

Single-cell RNA sequencing begins with the isolation of individual cells from a heterogeneous sample using methods such as limiting dilution, magnetic-activated cell sorting (MACS), or fluorescence-activated cell sorting (FACS). Next, the RNA is isolated and reverse transcribed into cDNA, which is then amplified by PCR and subjected to next-generation sequencing (NGS). While early forms of scRNA-seq  (e.g., single-cell tagged reverse transcription sequencing (STRT-Seq) and smart-seq) provide analysis of hundreds of cells using plate-based technologies, more recent incarnations (e.g., Drop-seq and 10× Genomics) achieve throughputs of tens of thousands of cells with droplet-based micro-well methods. A main advantage of scRNA-seq is that it offers unbiased analysis of cell-to-cell variability in gene expression.

Microscopy technologies span established widefield and confocal methodologies all the way through to modern super-resolution microscopy (SRM) techniques that enable fine-mapping of structures including subcellular organelles or extracellular vesicles. In general, these microscopy-based methods rely on fluorophore-labeled antibodies for labeling cellular proteins since fluorescent readouts allow multiple markers to be visualized in parallel. However, a defining feature of SRM is that it requires photoswitchable fluorophores to enhance resolution. For fluorescence microscopy to be effective, researchers must design antibody panels that consider key fluorophore properties such as brightness, Stokes shift, and excitation and emission spectra to avoid unwanted background signal that can generate misleading results.

Flow cytometry is a technique for measuring the physical and chemical properties of individual cells in suspension and, like microscopy, uses fluorophore-labeled antibodies for detecting specific proteins. In a conventional flow cytometer, a stream of fluid focuses the cells through a nozzle and directs them in single file past one or more lasers at an interrogation point; here, light scatter and fluorescent signals are measured, providing an indication of cell size/granularity and protein expression, respectively. Since the launch of the first commercial flow cytometer in the 1970s, the technology has evolved to provide faster, gentler analysis of a greater number of cellular parameters. Through careful panel design, researchers can now routinely measure 10 or more distinct fluorophores within the same experiment to identify cell lineage subsets or activation states.

Mass cytometry, also known as cytometry by time-of-flight (CyTOF), is a form of mass spectrometry applicable to single-cell proteomic analysis. It uses antibodies labeled with metal isotopes (e.g., lanthanides) to overcome the multiplexing limitations of flow cytometry and can interrogate 40 or more proteins simultaneously. After antibody binding, the cells are introduced into the mass cytometer, where they are vaporized. The metal isotopes are then accelerated through an electric field and the time taken to reach a detector is measured; the larger the isotope mass to charge ratio, the longer the time-of-flight. Despite enabling more targets to be studied within the same experiment compared to flow cytometry, drawbacks of mass cytometry are that it precludes any use of the cells in downstream studies, and the labeled reagents are often more expensive.

Where single-cell analysis involves the use of multiple fluorophore-labeled antibody reagents, it is essential that panel design be well thought out. This means considering key fluorophore characteristics to avoid spectral overlap and safeguard target detection – especially for low abundance analytes. Fortunately, we’re here to help! FluoroFinder’s Spectra Viewer lets you quickly compare over 1000 fluorophores from all suppliers in one intuitive platform, including many that have been literature-cited for single-cell analysis techniques, while our Panel Builder lets you optimize your multiplexed experiments with the very latest fluorophore and antibody offerings across more than 100 suppliers.