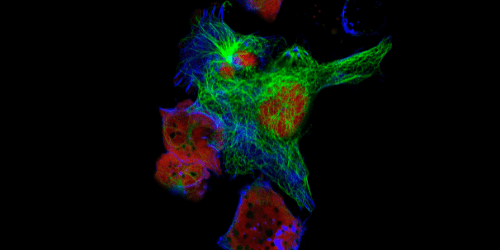 Conventional fluorescence microscopy uses fluorophore-labeled antibodies to visualize cellular structures, providing insights into cellular physiological and pathological states. However, the wave nature of light imposes a resolution limit of approximately 200 nm on conventional imaging, restricting the amount of detail that can be captured and potentially leading to important observations being missed. To address this constraint, various advanced fluorescence microscopy techniques have been developed, including methods that improve resolution by as much as 20-fold. Here, we explain how some of these techniques work and comment on the importance of fluorophore selection to fully realize their benefits.

Instead, confocal microscopy exposes only a defined region of the sample to the light source, scanning it in a raster pattern at a specific depth. This produces images of a single optical plane and, importantly, allows serial images to be stacked for visualizing 3D structures. Yet, because the sample penetration depth is limited, confocal microscopy is also primarily confined to visualizing thin specimens. For 3D imaging of thick biological samples – including live imaging of embryos, spheroids, organoids, and whole animals – light sheet fluorescence microscopy (LSFM) and two-photon microscopy are preferred.

A defining feature of both widefield fluorescence microscopy and confocal microscopy is the limit of resolution imposed by the diffraction of visible light wavefronts as they pass through the focal plane of the objective. Abbe’s law states that two objects can only be resolved if the distance between them is greater than half the wavelength of the excitation source.  In practice, any two fluorescently-labeled cellular structures cannot be distinguished if they are closer than 200 – 300 nm. Since this precludes fine-mapping of structures such as microtubule protofilaments, subcellular organelles, and synaptic vesicles, various advanced fluorescence microscopy techniques have been developed to enhance resolution.

Many advanced fluorescence microscopy techniques fall under the umbrella of super-resolution microscopy (SRM) for the improved lateral (x, y) resolution they can achieve compared to conventional methods. Within the SRM category, methods are broadly divided into those that decrease the dimensions of the point spread function (the size of the blur emanating from each fluorophore due to light diffraction) and those based on sequentially visualizing fluorophores either by spatially or temporally switching them between bright and dark states. Most SRM techniques require the use of photoswitchable fluorophores.

Stimulated Emission Depletion Microscopy (STED) is an SRM technique that reduces the point spread function by switching off any fluorophores at the edge of a defined area. It achieves this by overlapping the excitation laser with a second (longer wavelength) laser to form the shape of a donut, such that the emission of peripheral fluorophores is stimulated to the point of saturation/deactivation. By ensuring fluorescence is detected from only those fluorophores at the middle of the donut, STED provides a resolution of just 20 nm.

Photo-Activated Localization Microscopy (PALM) and Stochastic Optical Reconstruction Microscopy (STORM) instead involve activating different subsets of fluorophores in a cyclical manner. Briefly, a weak, short wavelength laser activates some of the fluorophores while a longer wavelength laser excites them, allowing the emissions to be collected. The main difference between the two techniques is that PALM typically relies on the expression of photoactivatable (PA) versions of commonly used fluorescent proteins fused to the target of interest (e.g. PA-GFP, PA-mCherry1, PA-TagRFP), while STORM uses photoactivatable organic dyes. Additionally, while PALM fluorophores are photobleached after activation, excitation, and localization (allowing another set of fluorophores to be imaged), STORM fluorophores can be reactivated by an activator dye situated in close proximity, with localizations from thousands of cycles being combined for image construction. PALM and STORM techniques improve resolution by 10-fold and 20-fold, respectively, compared to conventional fluorescence microscopy.

Other advanced fluorescence microscopy techniques include:

Although some fluorophores are designed specifically for advanced fluorescence microscopy techniques, many existing fluorescent dyes can be used for the methods just described. For example, Active Motif’s website highlights the value of certain ATTO dyes for STED, while Thermo Fisher Scientific’s website cites publications using Alexa Fluor® dyes for STORM. Critically, understanding the characteristics of any fluorophore will inform experimental design – and that’s where we come in! FluoroFinder’s Spectra Viewer lets you quickly compare over 1000 fluorophores from all suppliers in one intuitive platform, including many that have been used for advanced fluorescence microscopy techniques.