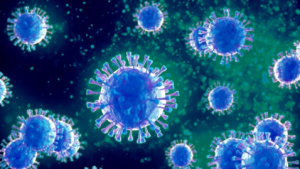 Multicolor flow cytometry can be used to detect and characterize viral antigens. This technique, called flow virometry, allows researchers to define viral particle profiles and better understand the relationship between infectivity and transmissibility at the level of individual virions. Here we examine the progression of flow virometry and some of its most common uses today.

Flow cytometers have been used to detect viral particles based on light scattering as early as 1979, however resolution limitations restricted this application to very large viral particles. The development of nucleic acid dyes in the early 2000’s allowed for the expansion of flow virometry to many new virus types. Yet this genomic staining technique can only detect larger DNA viruses. Antibodies were first used to detect viral surface glycoproteins via forward and side scatter parameters in 2014. Many fluorescent flow virometry techniques have since been developed, where viral surface proteins are labeled directly with a fluorescent dye conjugated antibody or indirectly with a fluorescent secondary antibody.

Recent advances in flow cytometer technology have vastly improved resolution and reduced background signal for small particle detection.  This has made flow virometry a powerful tool for the detection and characterization of viruses. Common applications include:

The rapid emergence of dangerous new viral strains such as SARS and MERS, has demonstrated the importance of flow virometry for the detection and characterization viral particles. For example, an image cytometry-based high-throughput screening method was developed to test potential inhibition antibodies to MERS-CoV .

Researchers are currently developing antibodies to the novel coronavirus SARS-CoV-2 , which first emerged in Wuhan China in late 2019. These will allow researchers to further characterize the viral surface glycoproteins and develop both preventative vaccines and antiviral treatments.