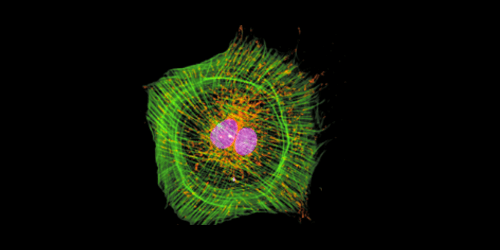 Advances in flow cytometry instrumentation, technology and chemistries have enabled researchers to expand their experimental parameters rapidly. Experiments that were once limited to the detection of three to four parameters have increased to detect up to 40 compounds fluorescing at different wavelengths, permitting the multi parametric analysis of cells. As advanced fluorescence detection created added complexities in experimental design, it is helpful to step back and understand fluorescent molecules used in flow cytometry.

Fluorescence is described in terms of excitation and emission. A fluorochrome may be excited by a laser at a defined excitation wavelength, at which time the molecule absorbs light photons. Then, as it returns to its ground state, the fluorochrome emits those photons with less energy and at a longer wavelength. The difference in these two excitation and emission wavelengths is called the Stokes shift. Fluorochromes exhibiting larger Stokes shifts are generally more desirable for fluorescent research, as the emitted light can be easily distinguished from the exciting light source.

Because the color of the exciting and emitting light are different, they can be separated from one another by using optical filters. 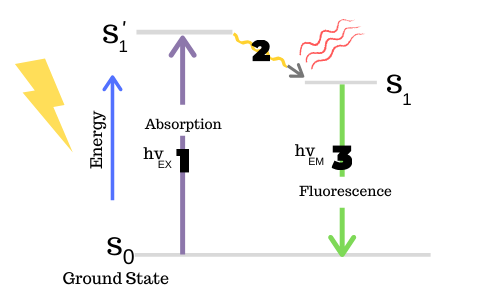 They can be visualized using a spectra viewer. Spectra viewers allow the researcher to understand the emission and excitation properties of a given fluorochrome and help them determine the best excitation and emission filter set to use for that fluorochrome.

FluoroFinder’s new spectra viewer allows researchers to visualize the excitation and emission properties of fluorescent compounds from multiple vendors to select combinations of fluorochromes that will work together optimally with the specific lasers and filters of their instrument.

Fluorochromes used in flow cytometry are essentially those that can attach in some way to biologically significant molecules and are excitable by the lasers commonly found on commercial flow cytometers.

These fluorochromes can attach to antibodies or proteins, free molecules that become florescent when bound to a target, or have other fluorescent characteristics under various biological conditions.

Here we provide a breakdown of fluorochrome types.

Relatively higher molecular weight compounds isolated from cyanobacterial or algal sources include phycoerythrin (PE) and phycocyanin. Together with the low MW compounds, these fluorophores are very well characterized and widely available.

These dyes are considered ideal for multiplexing experiments, as researchers can obtain several readouts from a single sample. Examples of tandem dyes include PE/Cy5 and APC/Cy7.

Qdots are typically excited by the violet laser, although they can be excited by any light below the emission maximum, so they need careful planning when used in panels.

Used in a wide variety of cellular biology applications, fluorescent proteins including GFP, YFP, RFP, etc.. Fluorescent proteins offer several advantages over alternative fluorescent molecules and are often used in Flow Cytometry. One of the major uses for these proteins is for the purification of transfected cells using the cell sorter.

Brightness plays an important role when considering fluorochromes. Brighter fluorochromes should be reserved for critical markers of low expression, or rare events.

While there are several resources and charts online with varying selections of fluorochrome brightness. Relative brightness data is integrated into FluoroFinder indicated by brightness bars displayed under the shown fluorochrome, making it easy for researchers to visualize without having to refer multiple resources when designing their experiments.

Considerations that must be made when choosing fluorochromes include brightness of the dyes, instrument configuration and staining protocol. With the continued development of new fluorochromes, it is critical to stay up on the trends and available options across multiple suppliers to ensure researchers are making the best decisions while not compromising the quality of their data.

FluoroFinder makes it easy to visualize and find the optimal fluorochrome from multiple suppliers with the flow cytometry panel builder, and on the spectra viewer.