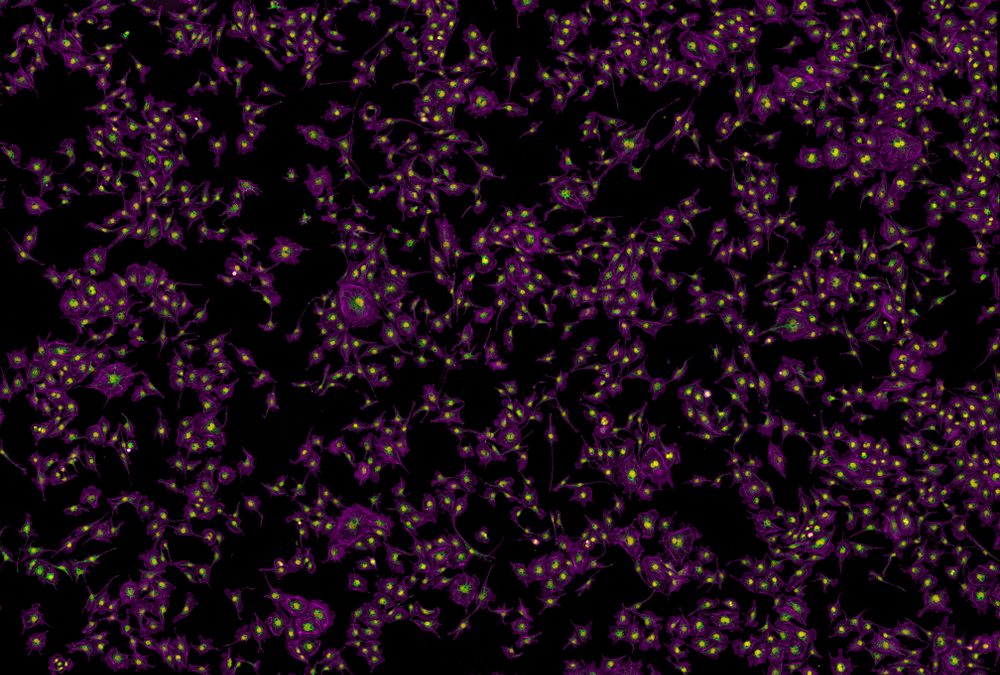 Tyramide signal amplification (TSA), also known as catalyzed reporter deposition (CARD) or tyramine amplification technique (TAT), is a method used for detecting low-abundance proteins or nucleic acid sequences in situ. It functions by producing high density labeling at a specific target site, via antibody-based detection, and can be used in any application that is compatible with the enzyme horseradish peroxidase (HRP). Critically, TSA significantly increases assay sensitivity without compromising resolution or enhancing background signal. It also helps reduce primary antibody use, can simplify panel design for multiplexed applications, and offers faster results through shorter scanning times or fewer protocol steps.

Tyramide signal amplification involves HRP-catalyzed conversion of an inactive tyramide substrate (comprising tyramide labeled with a fluorophore or a hapten such as biotin) to an active form able to covalently bind tyrosine residues on proteins at or near the HRP. Because the HRP is localized to an analyte of interest using antibodies, the resultant high density tyramide labeling at the target site enables detection of even scarce biomolecules. 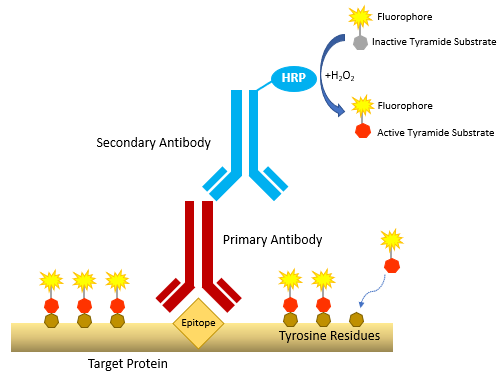 TSA has been reported by reagent manufacturers including Biotium, Stratech, and Thermo Fisher Scientific to increase the detection sensitivity of techniques such as fluorescent immunocytochemistry (ICC), immunohistochemistry (IHC), and in situ hybridization (ISH) by up to 200-fold compared to using conventional methods for target detection.

While TSA can be introduced into any protocol that is compatible with HRP, it is most commonly used for ICC, IHC and ISH. A typical TSA-based ICC or IHC workflow involves either direct or indirect detection of the target analyte using HRP-conjugated antibodies, followed by addition of the tyramide reagent. The HRP then converts the tyramide reagent to an active form in the presence of a low concentration of hydrogen peroxide (H2O2), allowing it to bind any tyrosine residues in its vicinity. Where the tyramide is labeled with a fluorophore, the resultant signal can be measured using standard fluorescence microscopy techniques. Hapten-labeled tyramide reagents instead require one or more additional protocol steps (e.g., incubation with a fluorophore-labeled streptavidin reagent, or with enzyme-labeled avidin followed by addition of a chromogen) to produce a measurable readout. Tyramide signal amplification for ISH is based on similar principles but commonly uses biotinylated probes for detecting specific nucleic acid sequences, with avidin- or streptavidin-labeled reagents being employed for detection. Irrespective of the application, the outcome is the same – production of a high concentration of the chosen label at the target site to increase assay sensitivity.

As well as increasing assay sensitivity, TSA provides several further advantages. First, it allows researchers to use less antibody or probe, making it worth considering using TSA even in situations where enhanced sensitivity is not required. For example, PerkinElmer has shown TSA to allow up to a 1,000-fold reduction in the amount of antibody used, which can equate to a major cost-saving. TSA also simplifies panel design for multiplexed applications by providing greater flexibility in reagent selection. A popular approach when working with plated cells or tissue sections is to perform serial TSA, either using a peroxidase quenching buffer to deactivate HRP (for ICC) or a microwave/citric acid treatment (for IHC with FFPE tissue sections) to remove bound antibodies, leaving the tyramide reagent behind before detecting a different target of interest; in this way, multiple antibodies from the same host species can be combined in the same experiment. Another benefit of TSA is that its high sensitivity can decrease scanning times or eliminate the need for PCR during ISH, translating to shorter workflows and fewer protocol steps.

Whatever your chosen technique or your requirement for tyramide signal amplification, we’re here to help! FluoroFinder’s Spectra Viewer enables you to quickly compare over 1,000 fluorophores from all suppliers in one intuitive platform, while our Panel Builder lets you optimize your multiplexed experiments with the very latest fluorophore and antibody offerings across >60 suppliers. Get in touch with our technical support team for guidance and support for experimental design.

Sign up for our eNewsletter to receive regular updates about techniques such as tyramide signal amplification and discover the very latest products available to streamline your research.