Newsletter: Tandem Dyes – Life is Brighter with a Buddy

The commercial availability of antibody-linked fluorescent dyes has expanded rapidly over the past decade. Where researchers were once limited to a handful of common dyes (FITC, PE, APC, PerCP, etc.), they can now choose from an extensive list of fluorescent dye lines – spanning the light spectrum from IR to UV. Additionally, researchers can now use several tandem dyes to improve the fluorescent signal for their experiments. However, while tandem dyes can serve as powerful research tools, they can also introduce a new set of problems to consider. Here we explore the benefits of tandem dyes and review some of the difficulties that they present.

Basics of Fluorescence
Fluorescence is described in terms of excitation and emission. A fluorochrome may be excited by a laser at a defined excitation wavelength, at which time the molecule absorbs light photons. Then, as it returns to its ground state, the fluorochrome emits those photons with less energy and at a longer wavelength. The difference in these two excitation and emission wavelengths is called the Stokes shift. Fluorochromes exhibiting larger Stokes shifts are generally more desirable for fluorescent research, as the emitted light can be easily distinguished from the exciting light source.

In this example image below created by FluoroFinder’s Spectra Viewer, all three dyes share the same excitation characteristics because they use the same donor, while the acceptor molecules differ. This changes the emission characteristics and causes varying degrees of Stokes Shift. 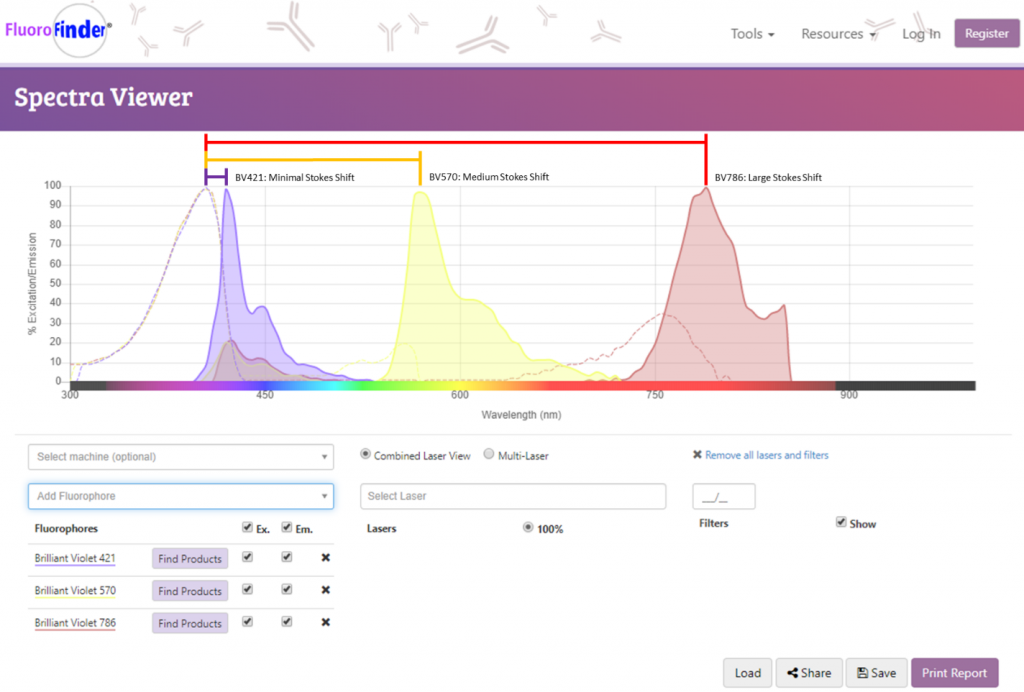 Tandem Dyes
One method for increasing the observable Stokes shift value is to use a tandem dye. Tandem dyes refer to two covalently bonded fluorochromes, a donor and an acceptor. As the donor molecule becomes excited, it transfers photons to the acceptor molecule via a radiationless process called Förster Resonance Energy Transfer (FRET). The difference between the excitation wavelength of the donor and the emission wavelength of the acceptor allows the tandem dye to display a greater Stokes shift than either individual molecule.

The Trouble with Tandems
Because the photon transfer efficiency in tandem pairs can differ each time the conjugation is performed, the resulting spectral overlap values can vary from lot to lot. Manufacturers have recently made great developments toward reproducible formulations and improved packaging consistency to reduce this lot-to-lot variation. However, each tandem dye antibody lot used in an experiment will require its compensation control to ensure that their spectral characteristics are identical (PMID: 4415368). Additionally, the covalent bonds that link tandem dyes may degrade over time and under certain conditions. For example, light exposure, temperature changes, lysing, and fixation can all affect tandem dye bond quality. Tandem dye breakdown can cause false-positive signals in the donor channel, giving the appearance of under-compensation. However, increasing compensation between channels will not resolve the problem, and may result in false negatives due to overcompensation.

While quality control of all fluorescent reagents is critical to provide reliable results, it is especially important in the case of tandem dyes. New lots and shipments of tandem dyes should always be tested for acceptable performance before use and regularly tested for stability to identify when a reagent should be removed from use.

Designing with Tandems
Designing a flow cytometry experiment using tandem dyes is like designing a panel with traditional dyes. Panel design tools like FluoroFinder make complex multicolor panel design easy by bringing all the available options into one place and dynamically updating those options as you select antibody/fluorochrome combinations and assign them to channels of your specific cytometer.

Fluorophore vs Fluorochrome?
Many researchers use the terms interchangeably, but they are not necessarily synonyms. Make sure you know the difference to accurately describe your fluorescent experiments!
A fluorochrome refers to any fluorescent dye used to stain cells or tissue for microscopic examination.

A fluorophore refers to any molecule or functional group which is capable of fluorescence.
Therefore, all fluorochromes are fluorophores, but not vice versa…