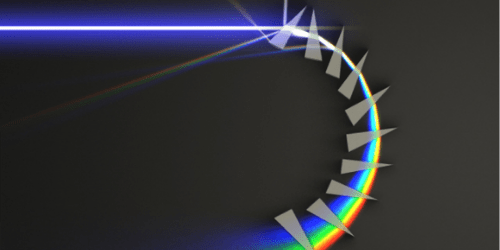 Spectral analyzers are the next generation of multicolor flow cytometers offering unparalleled sensitivity, increased detection range, do-it-all flexibility, and ease of use. Unlike conventional flow cytometers which use dichroic mirrors and bandpass filters to detect discrete ranges of wavelengths on individual photomultiplier tubes, spectral analyzers incorporate different optical approaches to achieve higher resolution. Rather than blocking and reflecting light to select a discrete band for measurement, spectral analyzers separate all incoming light to be distributed over several detector elements. The original approach developed on Sony Biotechnology instruments uses gratings or prisms to disperse photons according to wavelength across a detector array, while Cytek uses a proprietary technology known as coarse wavelength division multiplexing (CWDM) to split and collect light excited by spatially separated lasers on avalanche photo diodes. The theory is that this design allows for an increased number of detectors per laser without sacrificing the sensitivity of each detector channel with narrow emission bands. Both methods have more than proven their worth in the spectral arena.

Using this unique method of separating and collecting light, spectral analyzers tout key advantages over traditional cytometers. Most notably, there is increased compatibility for fluorochromes with similar spectra that would normally be incompatible on traditional flow cytometers. Spectral analyzers collect baseline data across the entire fluorescent spectrum for each single fluorochrome and when paired with sophisticated unmixing software, the instrument can identify and separate combinations of spectrally adjacent fluorochromes that would normally be indiscernible on a traditional cytometer. This increased compatibility helps expand multicolor panels to upwards of 40 to 50 colors, limited only by the available fluorochrome products on the market. Additionally, spectral analyzers have increased sensitivity relative to traditional cytometers because they can enhance dim signals and accurately distinguish true signal from sample autofluorescence. 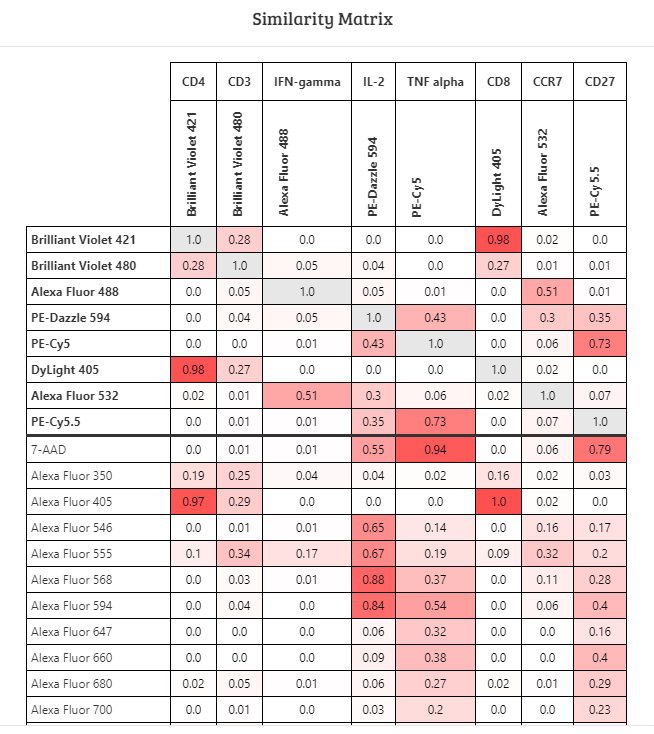 The similarity matrix data lets researchers know when they may be using two incompatible fluorochromes. High scores indicate that the two spectra have a high degree of overlap, thus are more difficult for the instrument to discern. There are now several commercially available spectral analyzers on the market from Sony Biosciences and Cytek, as well as a new spectral cell sorter, Bigfoot, which was just released by Propel Labs. FluoroFinder currently supports spectral instruments and features spectral-specific tools in the panel builder such as fluorochrome similarity scores and guides for spectral analyzer panel design. Coupled with over 2 million antibody products from 100 suppliers, FluoroFinder is ready to support the design of spectral panels that are larger than ever. If you are interested in feature updates from FluoroFinder to stay on top of new products and capabilities to optimize your panel design, let us know at support@fluorofinder.com. Flow cytometry remains one of the most popular laboratory techniques around and while spectral flow cytometry is an exciting new technology to keep an eye on, traditional flow cytometry is not leaving any time soon. Advancements over the years have enabled researchers to study more than 40 parameters within a single sample, making modern-day flow cytometry experiments a far cry from their early predecessors. It is impossible to guess the level of complexity flow cytometry will reach, but it seems fair to say that the evolution of this powerful technique is far from over.

The Sony ID7000, announced in 2019 and released in 2020, is Sony’s newest and most capable spectral analyzer. It is configurable with up to seven different lasers (320, 355, 405, 488, 561, 637, and 808 nm) and 188 detectors. This instrument collects light from 360 nm to 920 nm and can support experiments of greater than 44 different colors, more than any other instrument available. In addition to Sony’s upgraded spectral unmixing software, a new feature offered is their spectral reference library feature which allows a user to store and use saved spectral data so that a user may run an experiment without needing to run reference samples. Additionally, this setup is configurable with an auto-sampler compatible with 96-well plates, 384-well plates, and a 24-tube rack with new agitation and cooling features.

The Sony SA3800 Spectral Analyzer is Sony’s mid-level instrument. It supports up to four lasers while a 32 channel PMT array collects wavelengths of light from 420 nm to 800 nm. In addition to the hardware, Sony offers a unique software feature called “Global Standardization mode”. This allows users at different sites to standardize their instruments to a single baseline to eliminate instrument variability across instruments and sites.

The Sony SP6800 is Sony’s original spectral model and was one of the pioneering spectral instruments on the market. The SP6800 is equipped with two to three lasers and a 32 channel PMT array that collects wavelengths of light from 420 nm to 800 nm on the three-laser model. This model is set up more simply than the others in the Sony lineup, but has proven to be very capable and has provided great resolution while accurately sorting out challenging color combinations.

The Cytek Aurora is the company’s flagship model that has been on the market for a few years. The Aurora can be equipped with up to five lasers, three scattering channels, and 64 fluorescence channels. Cytek’s proprietary technology of high sensitivity Coarse Wavelength Division Multiplexing (CWDM) semiconductor detector arrays allow the instrument to separate and collect light very efficiently from 365-829 nm. Like the Sony instruments, the Cytek system allows users to save and reuse reference control data from single-stained and unstained samples so that reference controls are not necessarily needed with each experiment. Teamed with Cytek’s Automatic Micro-Sampling System (AMS) and SpectroFlo Software, this instrument is a proven and powerful tool for a wide variety of applications.

The Cytek Northern Lights is Cytek’s newer base model that came after the Aurora. This model comes equipped with one laser and nine colors but can be upgraded to three lasers and 24 colors. This model is meant to be simple and budget-friendly while remaining highly capable while backed by Cytek’s proprietary CWDM technology and software.

The Propel Labs Bigfoot Spectral Cell Sorter is the most recent entry into the spectral market. The Bigfoot is highly configurable with up to nine lasers and 60 detectors and has many integrated features that make it well suited to high throughput applications. It has an integrated Class II biocontainment cabinet with wash station, on-board calibration beads, built-in agitation, and temperature control. The Bigfoot can go from 6-way sorting into tubes, to 4-way sorting into a 96-well plate, or 8-way sorting into a 384-well plate.