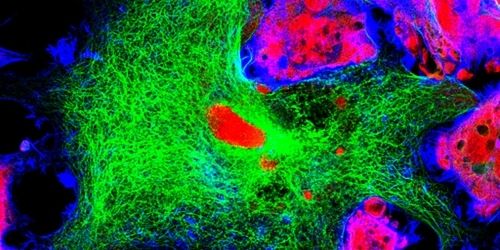 Confocal microscopy is a powerful imaging technique used to study biological specimens. It offers several advantages over conventional widefield microscopy, including the capacity to control depth-of-field and collect serial sections from thick samples. Fluorophores are essential tools for confocal microscopy, allowing multiple targets to be visualized simultaneously. This article explains some key fluorophore characteristics before highlighting some of the different types of fluorophores available.

What is a Fluorophore?

Fluorophores can broadly be defined as substances that re-emit light following light excitation. They include naturally-occurring fluorescent proteins such as allophycocyanin (a phycobiliprotein isolated from red algae) and synthetic organic dyes such as fluorescein.  By combining multiple fluorophores in the same experiment, each emitting light at a distinct wavelength, it is possible to determine the location and relative abundance of cellular proteins, monitor the formation of protein complexes, and study biological processes for insights into conditions of both health and disease.

When designing a confocal microscopy experiment that will detect fluorescent readout several important fluorophore characteristics should be considered. For example, the excitation and emission maxima, the peak of the excitation spectrum and emission spectrum, respectively, should be compatible with the lasers and detectors of the confocal microscope.

Fluorophore brightness is also fundamental. This is a property of the molar extinction coefficient (a measurement of how strongly the fluorophore absorbs light at a given wavelength) and the quantum yield (the ratio of the number of photons of light emitted to the number of photons absorbed), both of which are unique to each fluorophore. It is recommended that bright fluorophores be paired with scarce targets and vice versa.

Fluorescent proteins and organic dyes are used extensively for confocal microscopy, where the choice of fluorophore is primarily dictated by the properties just discussed. Well-known examples of fluorescent proteins include allophycocyanin (APC), R-phycoerythrin (R-PE), green fluorescent protein (GFP), and peridinin-chlorophyll-protein (PerCP). Organic dyes include the Alexa Fluor, ATTO, and CF® product ranges as well as dyes such as Star Bright, NovaFluor™, and Fire™.

An advantage of using fluorescent proteins is that they can be introduced into cells, tissues, or even whole organisms using expression vectors, allowing researchers to study biological processes in situ. However, compared to most organic dyes, fluorescent proteins are larger and less photostable. The small size of organic dyes enables their conjugation to biomolecules such as antibodies, biotin, or streptavidin without compromising protein function. Additionally, novel organic dyes have been developed that offer improved photostability and solubility.

Fluorophores targeted to specific organelles are widely used for confocal microscopy. Included among the available options, MitoTracker® is a mitochondrial stain that improves on rhodamine 123 and tetramethylrosamine by remaining within mitochondria following destruction of the membrane potential by fixation. This is complemented by LysoTracker for staining lysosomes, which (like MitoTracker®) can be purchased in a range of different colors, and the ceramide analogs NBD C6-ceramide and BODIPY FL C5-ceramide for staining the Golgi apparatus. For studying the endoplasmic reticulum, ER-Tracker Green and ER-Tracker Red are BODIPY-based dyes that bind ATP-sensitive potassium channels found only in the ER membrane.

DNA staining is often used to determine the location or number of cells present in a specimen. Common DNA dyes include DAPI, a blue fluorescent stain that is excluded from live cells by the intact plasma membrane; the Hoechst dyes (Hoechst 33258, Hoechst 33342, and Hoechst 34580) that, like DAPI, bind A-T rich regions of the DNA double helix; propidium iodide (PI), which can only enter cells with a compromised plasma membrane; and acridine orange, that is often used for identifying apoptotic cells by virtue of being able to enter engulfed acidic compartments.

With so many different fluorophores available to researchers performing confocal microscopy, it can be difficult to know which to choose. For information about fluorophore excitation and emission characteristics, and optimal laser and filter sets, FluoroFinder’s Fluorescent Dye Directory includes everything you need. To streamline panel design, our Spectra Viewer lets you quickly compare over 1000 fluorophores from all suppliers in one intuitive platform, while our Panel Builder helps you optimize your multiplexed experiments with the very latest fluorophore and antibody offerings across >60 suppliers.