For decades, immortal cell lines such as HeLa, HEK 293, A549, and Jurkat have provided researchers a useful and inexpensive platform in which to model normal and disease cellular pathways. However, researchers are increasingly moving away from immortalized cell lines in favor of more biologically accurate primary cell models. Here we examine the reasons for this trend and its implications for flow cytometry analysis.

ermed immortal for their ability to divide indefinitely, these cell lines can be easily kept alive in vitro for unlimited cell passages. Furthermore, the wealth of information from published studies, protocols, and technical notes about working with many common immortal cell lines make them a popular choice for continued use. 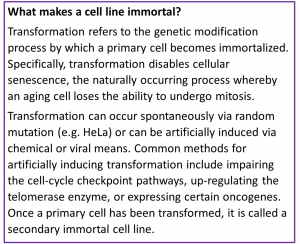 However, immortal cell lines do have some major limitations. Primarily, they do not truly mimic the complex cellular physiology that occurs in vivo. Establishing an immortal cell line from primary tissue often involves significant cellular engineering , which may alter cellular mechanisms in unexpected ways. For example, research has shown significant differences in enzyme expression levels between HEK 2093 and human renal cells , despite the cell line being a commonly used model for studying renal disease pathways. In some cases, a potential new drug may even target the very cellular senescence pathways that have been disabled in immortal cells , making any immortal cell line an unsuitable model for testing. Finally, the prolific use and sharing of these immortal cell lines over decades of research has led to serious concerns of widespread mislabeling and mischaracterization throughout scientific literature. This problem has been shown to be both global and increasing in scale over time, with one study finding “32,755 articles reporting on research with misidentified cells, in turn cited by an estimated half a million other papers” .

Primary cells are taken directly from a tissue or organ and are then grown under optimized culture conditions, making them far more representative of the native in vivo state than immortal cells. Therefore, primary cells provide excellent model platforms for studying either normal cell behavior, or the effects of drugs or toxic compounds. Using primary cells for early stage drug discovery research provides more clinically relevant phenotypic data and can reduce the risk of downstream complications in the drug development pipeline . Examples of primary cell types commonly used in research include epithelial cells, endothelial cells, immune cells, muscle cells, hematopoietic stem cells, mesenchymal stem cells fibroblasts, keratinocytes, and melanocytes. Unfortunately, primary cells also have their own drawbacks. Primary cells will undergo senescence and stop dividing after a certain number of passages, limiting their lifespan and potential usefulness for research applications. Additionally, because primary cultures are heterogeneous mixtures of the cell types found in the native tissue, they typically require specialized growth conditions and may have specific nutritional needs , making primary cultures much more difficult to maintain than immortalized lines. Finally, primary cell cultures are much more susceptible to genetic and expression variabilities due to differences in donor samples or inadvertent inducement during sub-culture steps . Pre-screening cells for specific characteristics or sensitivities to known stimuli may be necessary to account for such variability . Despite these difficulties, improved cell culture techniques are allowing researchers to increasingly use primary cell types to more accurately model complex physiological behaviors and drug responses.

In addition to the challenges of culturing primary cells stated above, there are also difficulties associated with isolating primary cells from whole tissue for flow cytometry analysis. Specifically, cells must be gently coerced into a single-cell suspension that is suitable for the cytometer’s fluidics system. This may require the use of enzymes (e.g. collagenase, elastase, hyaluronidase, pronase, dispase, trypsin, DNase) or EDTA, however sample preparation protocols must ensure that no additional contaminants or endotoxins are introduced . Additionally, because these proteolytic enzymes can affect both the antigenicity of surface proteins and cell viability, care must be taken to optimize the enzyme concentration, incubation time, and temperature .   In conclusion, researchers are increasingly using primary cells to study normal cellular or disease pathways and to test drug responses in vitro because primary cell models offer improved modeling accuracy regarding the complex physiological and biochemical environment that occurs in vivo. Although there are many practical challenges to using primary cells in research, specifically for flow cytometry analysis, continued improvements to cell culture and sample preparation techniques will likely drive further adoption of primary cells for drug discovery research.   Tailoring a flow cytometry panel specific to your cell type is a crucial step in experiment planning. In collaboration with Astrolabe Diagnostics, coming soon to FluoroFinder is our new Auto-Antigen Density feature on our flow cytometry Panel Builder tool. Select your specific cell type and our antigen density will help you select the best fluorochrome for each marker in your panel. Let us know if you would like to test and provide feedback on our Auto-Antigen Density feature at feedback@fluorofinder.com.