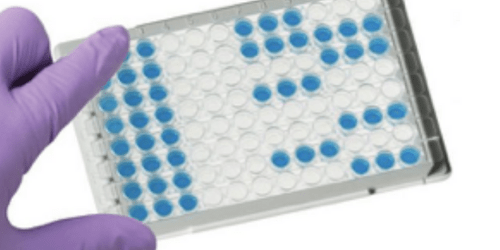 The enzyme-linked immunosorbent assay (ELISA) offers a simple and effective method for rapid biomarker detection.  The main benefits of ELISA include good specificity, low cost, and straightforward readout.  However, the limited sensitivity of standard colorimetric ELISA hinders its wide application in clinical diagnosis and the necessity for large quantities of antibodies can prohibit its use in high throughput screening.  Here we examine two fluorescent well-based immunosorbent assay alternatives to traditional colorimetric ELISA.

In standard colorimetric ELISA workflows, samples are absorbed to the surface of wells on a polystyrene microplate.  Then a detection antibody is applied to the samples, and any non-bound antibodies are washed away.  Finally, the plate is developed by applying a substrate, resulting in a visibly detectable enzymatic reaction in wells where the antigen is present. The enzymes most commonly used in colorimetric ELISA include peroxidase, alkaline phosphatase, and beta-galactosidase.

Fluorescence-linked immunosorbent assay (FLISA), combines well-based immunosorbent assay techniques with fluorescent reporters.  Rather than an enzymatic reporter, FLISA uses an antibody conjugated to a fluorescent dye, which is detected by exposing the plate to light at a particular wavelength.  This method is especially useful for high throughput screening, as FLISA methods generally consume fewer antibodies and require less manipulation than traditional ELISA.

FluoroFinder’s antibody search tool supports FLISA based applications with a database of over 1 million antibodies from over 50 top suppliers.

Fluorescent ELISA (FELISA) is a variation of the standard colorimetric ELISA. Rather than a visible color change, the enzymatic reaction creates a product that fluoresces when excited by light at a specific wavelength.  FELISA is generally more sensitive than colorimetric ELISA, as the measured fluorescence is relatively proportional to the amount of analyte present.  FELISA also has a wider dynamic range, allowing very high readings to be measured accurately. There are a variety of enzymatic reactions which result in fluorescent products that have been developed into FELISA techniques.

Both FLISA and FELISA methods can be powerful tools in the biological researcher’s toolkit.  By combining the specificity, low cost, and simple readout of colorimetric ELISA with the streamlined workflow of FLISA or the increased sensitivity of FELISA, these methods will continue to be useful for both research and clinical labs.