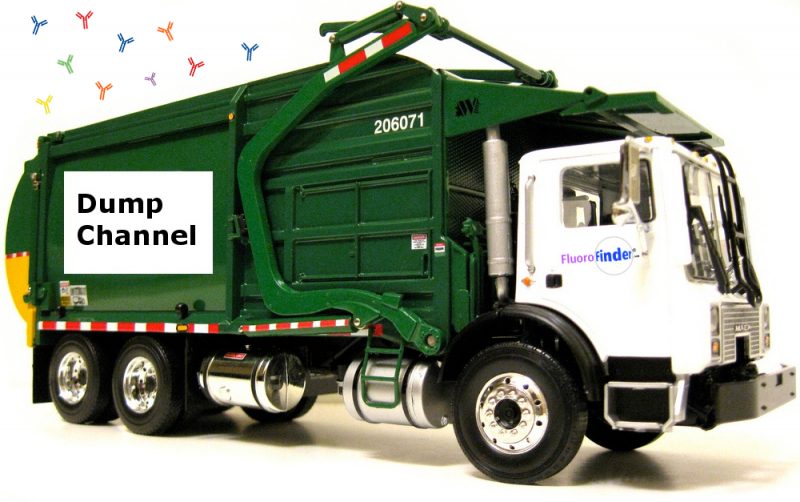 What is a dump channel?

Simply put, a dump (also called an exclusion) channel is used to group and exclude everything that is not of interest for your study.
This typically involves using one or more antibodies to stain antigens that are known not to be expressed by the target cell population. These signals can then simply be gated out of the final analysis, whereas any cells that are negative for the dump channel signal can proceed to further analysis.

What goes in a dump channel?

The benefit of a dump channel is that it can group multiple antibodies using the same (or similar) fluorochrome into a single channel. By combining these exclusion signals into one channel, researchers leave all other channels free for the actual analysis.
For example, consider a cell population with 3 types of cells:

Why should you use one?

Non-specific labeling is most common for Fc receptor-positive cells, dead and dying cells, and debris. Obviously, this can significantly skew the data and lead to false analysis.
Gating out ambiguous signals is especially important for heterogeneous cell populations to ensure that cell types are being identified properly.

How do I design a panel using a dump channel?

Adding a dump channel to your panel design is easy!
Simply, click on the “add dump channel” button during the marker selection step.

A dump channel will be created where you can add as many markers as is necessary. Alternatively, you can always add additional dump channels by clicking the button again.

So, be sure to remember to include a dump channel in your next experiment design! Using these negative controls will help with your gating strategy, and combining them into a dump channel will leave all of the other channels open for your analysis.