Fantastic Beasts and How To Image Them 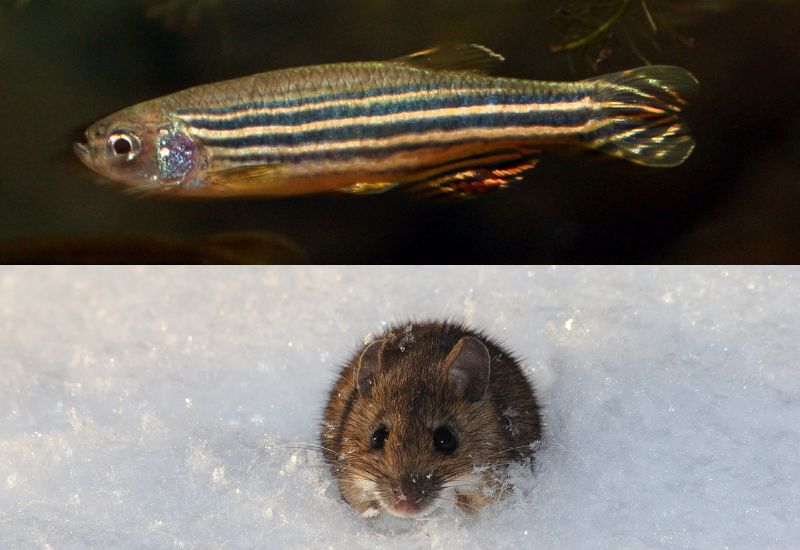 While fluorescence microscopy has long been employed for imaging plated mammalian cells, its use for visualizing organisms is flourishing. In recent years, winning images in Nikon’s annual Small World photomicrography competition have included a zebrafish, a turtle embryo, and the eye of a beetle, all captured in exquisite detail using a variety of fluorescence microscopy techniques. Here, we share some examples of the types of organisms being imaged by researchers and comment on the methods being implemented.

Fluorescence microscopy is an evolving technology

The basic fluorescence microscope is a fundamental tool for researchers, allowing researchers to image biological systems without significantly altering their core architectures. However, the limited resolution of early instruments has spawned the development of more advanced fluorescence imaging technologies, including laser scanning confocal microscopy, two-photon microscopy, and scanning disk confocal microscopy, as well as total internal reflection microscopy and various forms of super-resolution microscopy. With these platforms and the growing array of novel fluorophores, the capabilities of fluorescence microscopy have expanded to more sophisticated applications.

One way in which fluorescence microscopy has progressed is through its improved capacity for imaging organisms. The following are just a few examples of the different types of organisms studied by researchers.

Zika virus (ZIKV) has been under intense scrutiny since the 2015 outbreak in Brazil, largely because it can cause birth defects such as microcephaly and Guillain-Barré syndrome if contracted by pregnant women. To investigate the main stages of virus morphogenesis in mammalian cells, researchers at the Federal University of Rio de Janeiro stained ZIKV-infected epithelial cells with serum from a ZIKV infected patient, using an Alexa Fluor® 488 conjugated anti-human secondary antibody for super-resolution microscopy-based detection. Their data, published in Nature, showed the endoplasmic reticulum to have an important role in virion processing.

The unicellular protozoan Paramecium is widely used as a model system for studying endocytosis, the uptake of matter by living cells through membrane invagination and vesicle formation. One way of performing such studies involves feeding Paramecium indigestible particles such as BSA-FITC, WGA-FITC, dextran-Texas Red, cholesteryl-Bodipy, or latex for visualization using confocal microscopy or two-photon excitation laser scanning microscopy. By immobilizing the cells at successive time points, researchers can obtain temporal information about the development and movement of vesicles during endocytosis and investigate how the underlying mechanisms might be manipulated.

The nematode worm Caenorhabditis elegans is often used for studying embryonic development and differentiation due to its simple structure, short period of embryogenesis, and the fact that it is easily cultured in a petri dish. However, the rapid kinetics of cell division in C. elegans make targeting specific developmental stages challenging. To overcome these difficulties, researchers at the National Institutes of Health enclosed whole C. elegans worms expressing fluorescent cell cycle markers (signal peptidase 12-GFP and histone2B-mCherry) in cellulose capillaries to constrain their orientation before performing high-pressure freezing. This enabled identification of dividing embryos in the intact worm using super-resolution cryo-fluorescence microscopy, which could then be imaged in greater detail using focused ion beam scanning electron microscopy.

Zebrafish (Danio rerio) offer many advantages for modeling human disease, notably a fully mapped genome that shares high homology (~70%) with the human equivalent. They also have rapid reproduction rates and produce large numbers of transparent embryos that develop outside the mother, allowing for easy manipulation. One of the many ways in which zebrafish have been exploited for scientific research is through their use for studying the pathogenesis of enterohemorrhagic Escherichia coli (EHEC). By using EHEC-mCherry as a food source for Paramecium caudatum, and subsequently using P. caudatum as a food source for zebrafish larvae, researchers at the University of Birmingham and the University of Texas McGovern Medical School at Houston have been able to follow EHEC infection in real time using confocal microscopy.

Mice are classic model organisms for scientific research, being used for applications spanning drug development to the study of embryogenesis. With so many descriptions of murine imaging studies available, it would be impossible to cover them all here, but the use of hollow agarose cylinders for minimizing tissue drift during time-lapse imaging of murine embryos provides an example of how the field of murine imaging is evolving. A major hurdle for these types of studies lies in mounting the embryos such that they maintain their shape and can undergo unimpeded expansion, without compromising multi-angle image acquisition. When agarose cylinders were used during imaging of transgenic embryos by light-sheet microscopy – a study that involved labeling endothelial cell membranes and nuclei with mCherry and yellow fluorescent protein, respectively – robust quantitative data was generated that enabled tracking of morphogenetic changes.

Whether you’re imaging mammalian cells, virus particles, or larger organisms such as those mentioned here, FluoroFinder can help with reagent selection and panel design. Our Antibody Search function helps you find validated antibodies for your target of interest, while our Spectra Viewer allows you to quickly compare over 1,000 fluorophores from all suppliers in a single platform. If you’re multiplexing your study, use our Panel Builder to design a spectral of conventional flow cytometry panel with fluorophores and antibodies from all suppliers in a single resource. Whatever the aim of your research, our support team is always here to provide guidance.

Sign-up for our eNewsletter to receive regular updates about fluorescence microscopy and other fluorophore-based techniques.