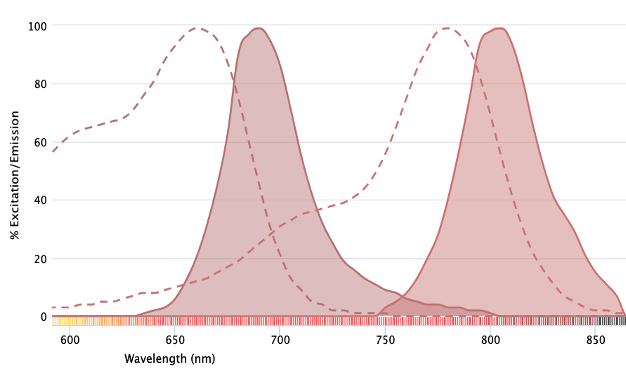 A major advantage of fluorescent detection is that it enables multiple antibodies to be combined in the same experiment. Using techniques such as immunocytochemistry (ICC) and immunohistochemistry (IHC), researchers can simultaneously probe the expression of several different proteins within a particular cell type or determine which cells are located next to one another in a section of excised tissue. Fluorophores with emission maxima in the near-infrared (NIR) spectral region are seeing increased use for these types of studies, as well as for live cell and in vivo imaging, since they address the well-documented problem of cellular autofluorescence.

What is near-infrared light?

Visible light falls within the middle of the electromagnetic (EM) spectrum and has wavelengths spanning approximately 400 nm (violet) to 700 nm (red). Numerous fluorophores are available that emit light within this range. However, novel dyes with emission maxima outside of these wavelengths are being developed to push the boundaries of what is currently possible using fluorescence-based techniques. The infrared spectral region lies beyond the upper limit of visible light and is divided into near, middle, and far infrared according to wavelength. While near-infrared light has wavelengths of around 700 – 1,400 nm, middle and far infrared light have wavelengths extending to approximately 3,000 and 10,000 nm, respectively.

Cellular autofluorescence is a phenomenon that arises due to the inherent fluorescent nature of various cellular components. These include extracellular matrix proteins such as collagen and elastin; cyclic compounds like flavins and NADPH; the aromatic amino acids phenylalanine, tyrosine, and tryptophan; and organelles such as lysosomes and mitochondria. Many of these emit light in the 350 – 500 nm range, a feature shared with popular fluorophores such as DyLight® 350 and Alexa Fluor® 405, which can lead to reduced assay sensitivity and false positives. Because near-infrared fluorophores emit light at much higher wavelengths, they overcome the issue of cellular autofluorescence by virtue of being detected in a distinct channel.

What other advantages do near-infrared fluorophores offer for imaging?

As well as being used to address cellular autofluorescence, near-infrared fluorophores provide increased flexibility for panel design by allowing researchers to distribute fluorophores across more lasers and detectors (where available). Tandem dyes based on common fluorophores such as APC and PE are especially useful for higher plex experiments since they can be used to maximize the number of readouts obtained from a single laser. Another benefit of near-infrared fluorophores is that they are less prone to light scattering than fluorophores that emit in the visible spectrum, which can improve photon penetration into tissues.

What are some examples of near-infrared fluorophores?

A growing number of near-infrared fluorophores is available to researchers, including various tandem dyes. The following are some well-known examples:

For a more comprehensive list of available near-infrared fluorophores, visit our Fluorescent Dye Directory and filter by emission wavelength.

When designing a fluorescence imaging experiment, there are several important factors to consider for fluorophore selection. First, the excitation and emission maxima of each fluorophore should be matched to the imaging system’s lasers and detectors. It is also advisable to rank fluorophores and cellular markers such that brighter dyes are paired with lower density antigens, and vice versa. If a multiplexed experiment will measure markers for only a limited number of available, off-the-shelf antibody conjugates, assigning fluorophores to these first, before configuring the remainder of the panel, can be prudent. Also, it is important to consider purchasing fluorophore-labeled antibodies in bulk to help safeguard experimental reproducibility for long-term studies.

Whatever the aim of your fluorescence imaging study, FluoroFinder is here to help with your fluorescent experiment design. Our Antibody Search helps you quickly compare over 3,000,000 antibodies validated for your chosen application, while our Spectra Viewer allows you to visualize 1,100+ fluorophores – including many near-infrared dyes – from all suppliers. If you’re intending to multiplex your experiment, check out our Panel Builder to view the fluorophore and antibody offerings of 60+ suppliers in the context of your instrument configurations. And don’t forget that our technical support team is always on hand to offer guidance.

Sign-up for our eNewsletter to receive regular updates about fluorescence imaging, and be one of the first to hear about new near-infrared fluorophores as they reach the market.